My work with the Foraged Colour project from initial ideas to final cloth
“I was one of the four textile artists collaborating with Linda Row on the Foraged Colour project. My role was to conceive and hand-weave cloth from British wool that had been dyed with foraged colours. Linda designed and constructed a dress from the cloth that I wove, and dyed all the wool for my cloth.”

Initial ideas
I love the research phase of a project, especially when working with other people; the energy increases, we bounce ideas off one another, connections are found and our ideas move forward.

I was inspired by the definition of forage that Linda put on the front page of foragedcolour.org

Discussing ideas with Linda Row’s sketches and range of colours from foraged dyestuff at our initial meeting.

Wandering has a timelessness; making me think of the folk/fairy tales set in a forest; Hansel and Gretel, and Little Red Riding Hood. 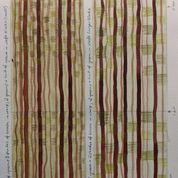 My initial ideas were to create a wandering path through a forest; referencing Annie Albers Under Way, 1963, using recycled silk fabric dyed red. A forest depicted with tree trunk verticals and leafy green horizontals, but then I saw Linda’s fashion sketch. The colours were beautiful; reminding me of autumns past, and the contrasts between autumn and spring. 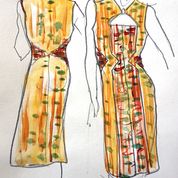 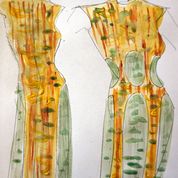 Clockwise from top left: Linda Row’s fashion sketches for Foraged Colour, which inspired me to look through my photographs from autumns and springs past, images from Bath, Tucking Mill and Stourhead.

My direction was set, two lengths of fabric, one depicting woods in spring and the other woods in autumn, from the same warp. 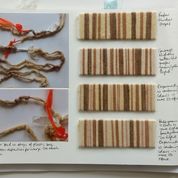 How could I give an idea of trees? I experimented with ikat to create blocks of colour in the warp with Linda, stripes in browns and purples; using the colours to suggest trunks, some closer and some further away. The next step was sampling, which involved some failures and changes to my ideas… read how it went in my next blog post. 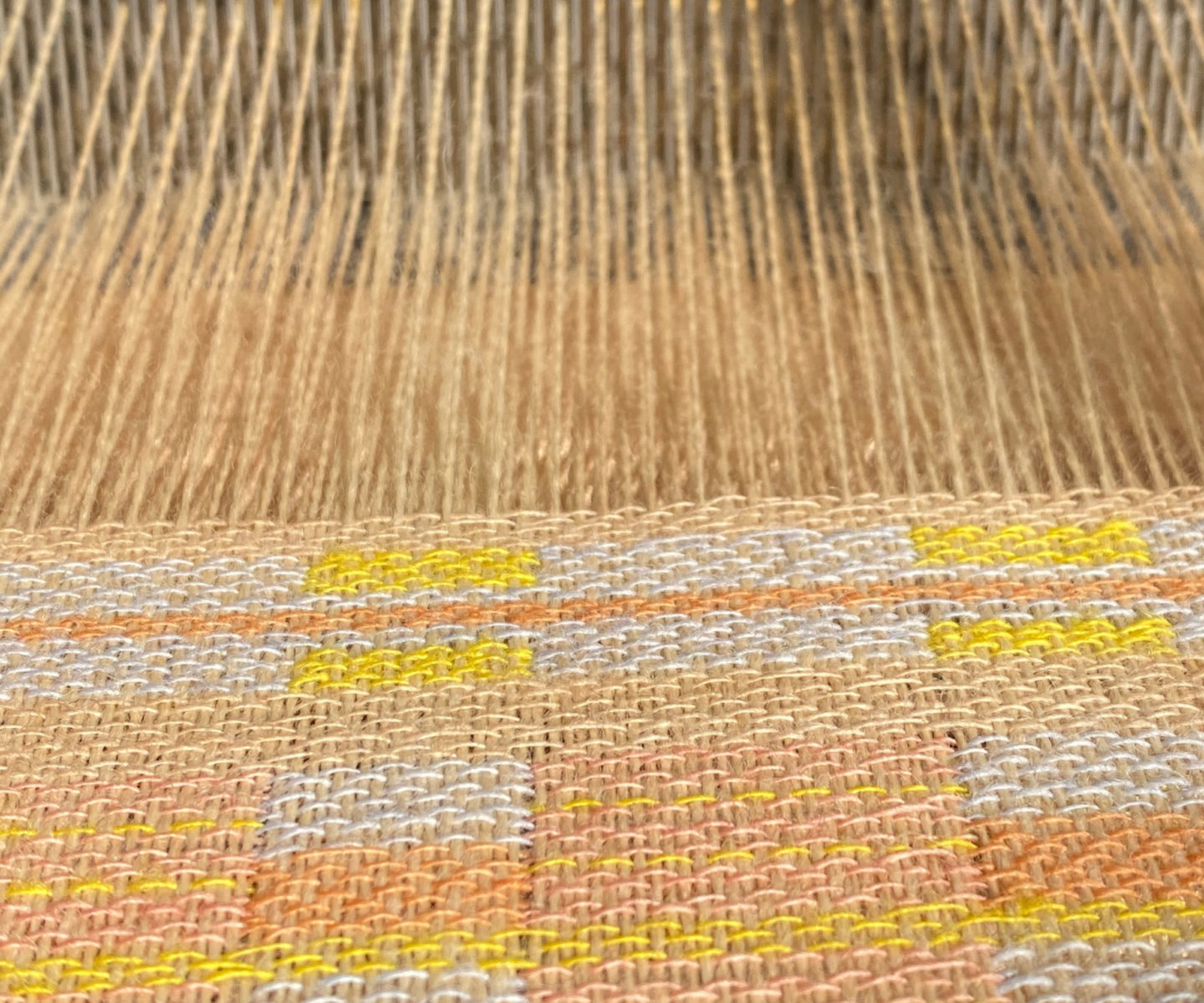 I have been involved with sustainable clothing and textile design since the late nineteen nineties and within my practice as a designer, I have used the ‘Grande Teinte’ favoured by dyers in the past. These include Madder, one of the oldest known dyestuffs of which there are many different varieties, yielding red from their prolific roots system. Evidence of Madder has been found in Mohendro Daro in the Indus valley, thought to have been created circa 1750 BC. Herodotus found madder in Egypt 450 BC and Pliny described  a Madder type plant (Sandberg, 1994).

Other plants that contain red dye in their roots belong to the Gallium family and include:

Some of these plants have been identified in textiles from medieval Germany and it is thought that they were used where professional dyeing had not developed or the climate was unsuitable for Madder (Brunello, 1973).
Note: picking wild plants in moderation is acceptable but not removing roots. Should you wish to try some of these plants, Emorsgate have a selection of native wild plant seeds

This project is a culmination of research that I have carried out during  the past year, looking at the myriad of natural sources to obtain colour from, some of which are documented and others pure experimentation. I started with Brunello’s (1973) comprehensive list of plants that he recorded from historical dye documents and I identified the ones that could be found locally. This led to a fascination with the colours that could be achieved  simply walking outside the front door, such as Marjoram, Hollyhock, Gunnera, Beech, Oak and Mahonia. I started to trial leaves, barks, fungi and flowers and to create a collection, turning into boxes and boxes of dried materials.

As a sustainable designer in 2020, I have decided to confront the issue of endless air-miles that current clothing production involves and set a challenge to limit fiber, colour and making to the UK.  Working with four professional textile artists, creating unique pieces for me to work with, is a dream come true and we have been lucky to have support from The Arts Council to create the exhibition ‘Foraged Colour’.

The Dunstan family kindly gave me a studio to work in. Without running water this is akin to a medieval workshop but surprisingly it has been easy to adapt and it is a lovely space.

Supplying the artists with their yarns has been a demanding job because the natural plant materials are not uniform and yield slightly different colours, depending on the location and time that they were foraged. For example the ivy berries are picked from a wide range of locations, in order to leave enough for the birds. Some are ripe and other green, so the results vary. Ivy berries can yield colours ranging from purple to pale green , grey and teal, depending on modifiers such as the alkalinity of dye bath.

All the artists have developed their own palettes to work with and this includes:

and we have been lucky to source from wildcolours.co.uk   home grown

The initial stage of the project is underway but we are now having to reschedule the launch due to the current global situation. Updates will be posted on the website. We are working in partnership with a number of organisations such as Oxfam and have extended the concept of foraging to include reused materials, for linings and up-cycling workshops. New dates for these and other Foraged Colour workshops are to be be confirmed.

Honey fungus: this is potentially damaging to your garden, so I advise that if you collect this from a wood, put it under water immediately to extract colour and only reserve the water; return the waste fungus to the place you found it. 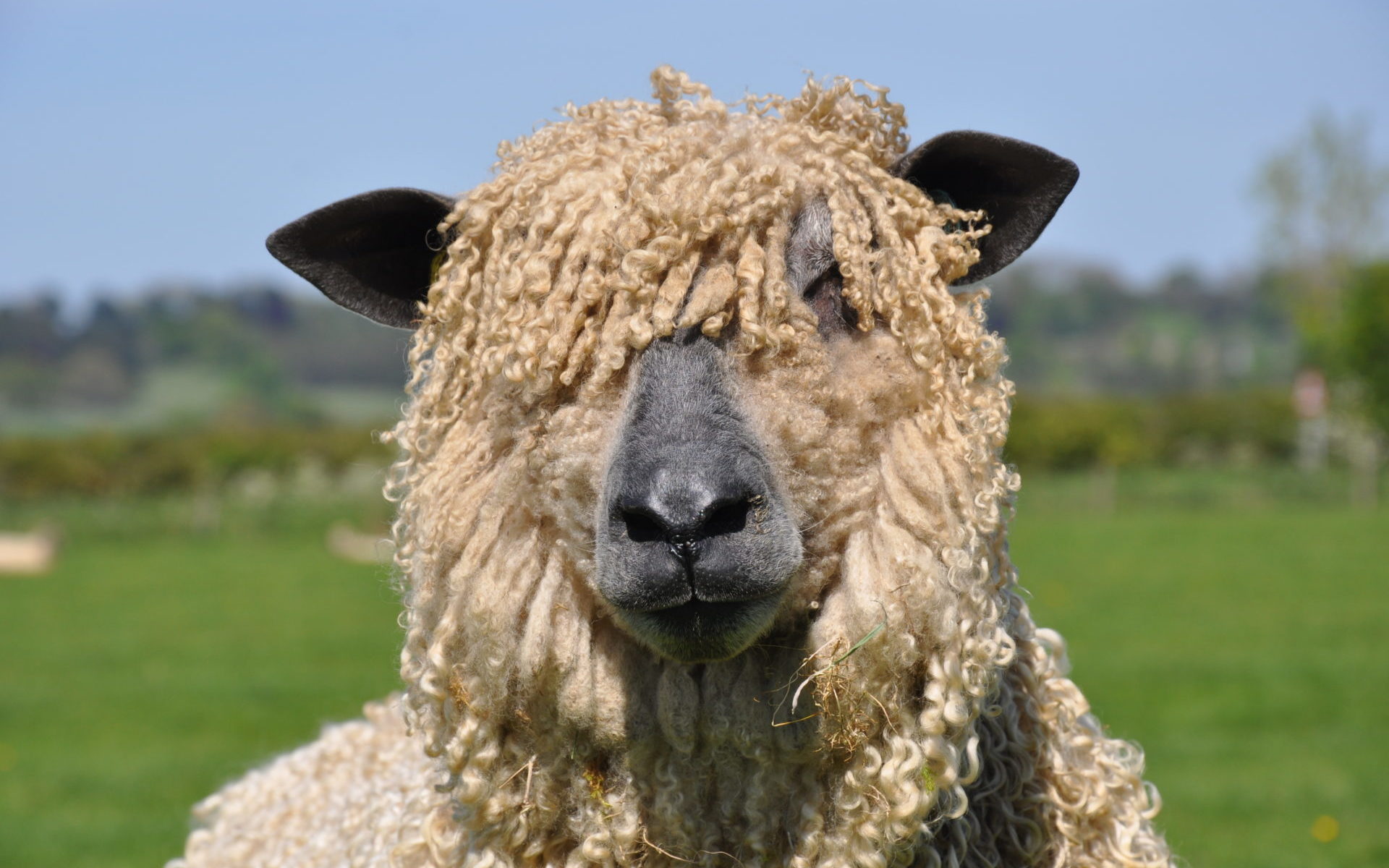 Sourcing British wool for weaving isn’t that straight-forward; not all products are online and often you have to contact suppliers directly, but it is rewarding if you make the effort.

END_OF_DOCUMENT_TOKEN_TO_BE_REPLACED 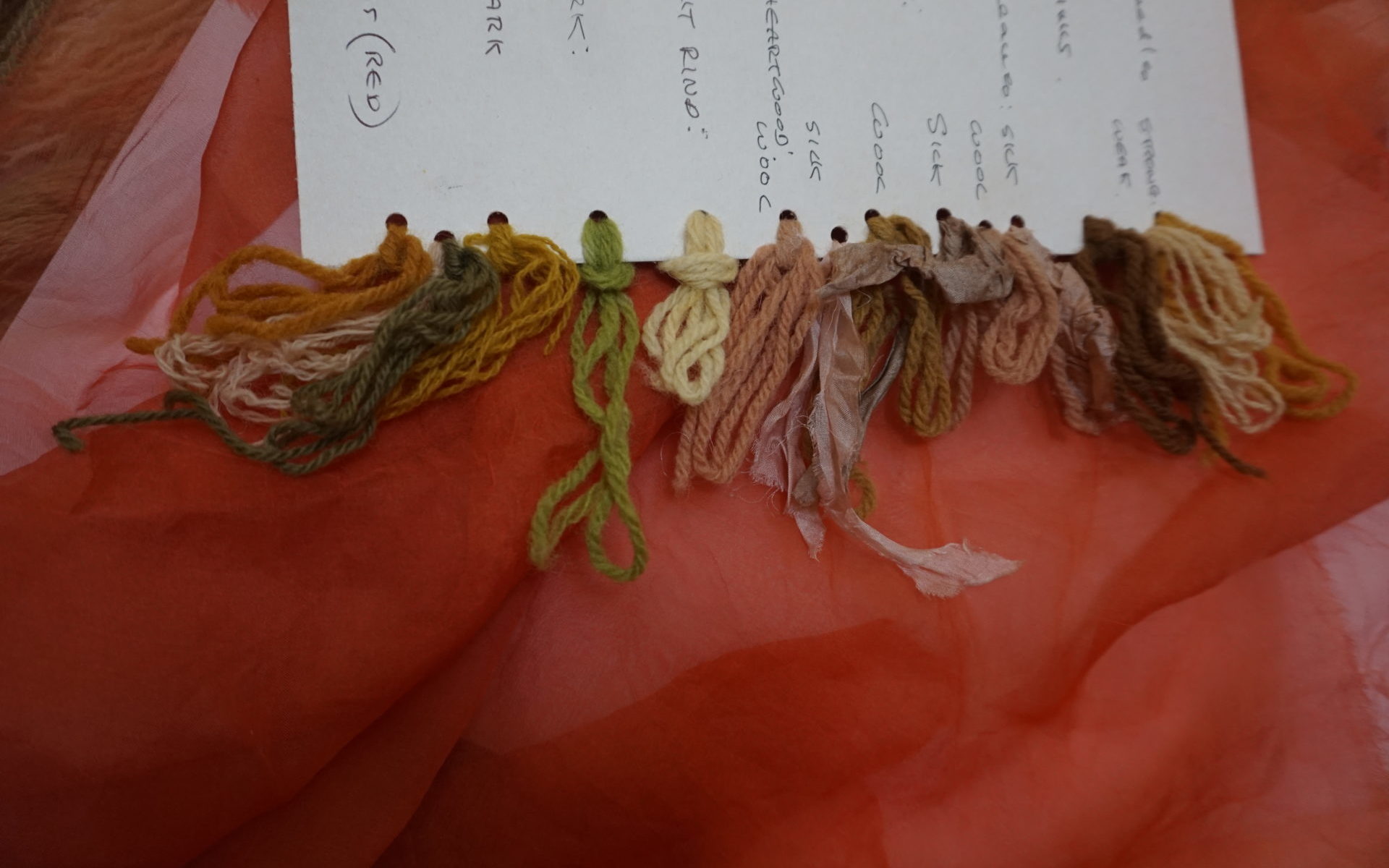 Foraged Colour is a new Arts Council funded project conceived by Linda Row. The project will investigate local, sustainable, and contemporary garment production and culminate in a touring exhibition.

Linda, a sustainable clothing designer, has been researching traditional dye recipes using foraged plants and lichens from her garden and nearby countryside.